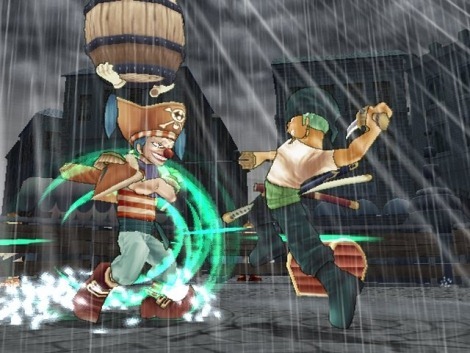 Having enjoyed the thoroughly immersive and engaging battles of the One Piece series, many fans have been waiting for a similarly themed fighting style game to be released. After all, who can discount the all-out battle between Luffy and CP9 at Eneis Lobby, and who can forget the emotional exchange during the battle with Eneru on Skypeia? Well, the developers have heard your cries, and One Piece Grand Battle for the PS2 is here to satisfy your needs!

One Piece Grand Battle (PS2) brings together the characters of One Piece in a no-holds barred showdown between each other. If you’ve always wanted to see how Luffy would fare against Zorro in a real battle, or what strategies the close-combat Chopper would utilize against Robin, then this is the perfect platform to fulfill your curiosities. Much akin to the Street Fighter or Tekken genres, the game pits two characters against each other in a fight to the finish. 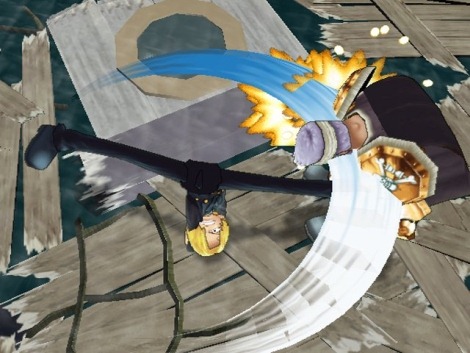 One Piece Grand Battle (PS2) sports a delightful cartoonish feel, lending credibility to the original comic’s artwork and style. The battles themselves, while not on par with the more established fighting franchises, are fun and engaging, and have everything you’d expect to see in a One Piece brawl. Want to perform a Gatling Punch on your enemy? Fancy using Sanji’s wind kick in a fiery finish? It’s all here!

The unique fighting styles and the strategy involved in planning an attack gives the game a well-polished feel, as if the developers cared enough to make sure the game stayed true to its core audience. If this has been on your mind for awhile, you definitely will have a blast with the game.


Make sure you don’t miss out any available One Piece game out there. Find more One Piece games with great deals on Play-Asia and Amazon.
Posted by Admin at 10:24 AM